I sometimes buy books because I find their covers adorable. My mother thinks this is a shallow enough reason, reprimanding me ever so often for unnecessary spending, but I tell her that I like taking the risk. ; ) Of course, if the book turns out bad, I sulk and promise myself never to fall into the beautiful-cover-equals-beautiful-story trap again, but I usually break it. : | Eep. I do not recommend judging books by their covers (literally, of course), but I like seeing pretty books on my shelf. : ) And since the realization of this unintelligent spending habit dawned on me, it has been one of my tug-of-war resolutions to limit my book shopping. I also have around fifteen untouched books lying around, by the way. GUH. : |

A few days before 2010 ended, Mico and I excitedly opened the doors of Fully Booked High Street, ready to make our last all-out spendathon for the year. He’s into graphic novels, while I’m into books and pretty notebooks/paper-thingys. And as we approached the counter, I decided to head off to the bestseller section in my hopes to get one last book. Then, I spotted it instantly—The Happiness Project by Gretchen Rubin. The cover was pretty eye-catching and yes, it was LOVELY. So…

…I took it off the shelf and plopped it onto the pile of books in our basket without looking at the synopsis. I had a split-second flash of guilt…that pesky voice in my head telling me NOT make the impulsive purchase. I tried to reassure myself it belonged to the Bestseller Section anyway—tried, tested, and proven to be a success. I set the voice on mute, brushed it off, and made my purchase. HEHEHE. : ) 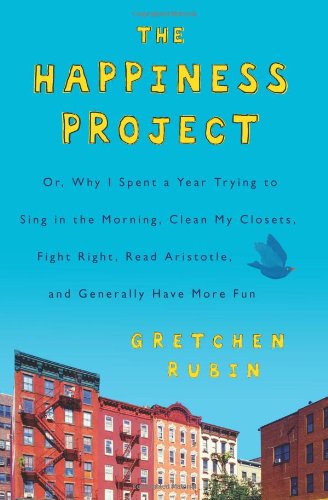 See how pretty it is? The wordings are also embossed so you can trace them with your fingers. Heeheehee. Me and my antics. : p

So I read the summary only when I got home; the first part of which reads:

Gretchen Rubin had an epiphany one rainy afternoon in the unlikeliest of places: a city bus. “The days are long, but the years are short,” she realized. “Time is passing, and I’m not focusing enough on the things that really matter.” In that moment, she decided to dedicate a year to her happiness project.

I thought it would be a good first read for 2011 because, of course, who wouldn’t want to jump-start their year with happy thoughts, right? : ) At first, I thought her recount would be something as lavish and as extravagant as Eat, Pray, Love, but I really liked how she said that she wanted to “change her life, without really changing it”—in short, finding happiness where you are.

I had a good feeling about it already.

The book is divided into 12 chapters—one for each month of the year, containing different themes on which several resolutions are weaved into. You might think that it’s a lot of layers to take in, but it’s really an easy read. Included also are feedback threads from her blog readers and simple, creative ideas on how to improve one’s happiness—usually involving one’s attitude and how getting things done (like tackling nagging tasks which I am very guilty of) significantly boosts one’s happiness. It’s very interesting, and at the same time, very inspiring. I’m getting really motivated to stick to my list of goals and resolutions for 2011 even if it means having to go to the gym several times a week, or getting things done even though I don’t feel like doing them…little things like that. No need for an indulgent trip to Italy! But on the side, I still would really, really want to try the mouth-watering Buffalo-mozzarella pizza at Naples. ; )

It was such a pleasure reading how Gretchen Rubin embarked on her monthly resolutions in a very down-to-earth manner. She openly talked about her struggles and limitations as well, which made me appreciate the book more because I could relate to most of them. I also found myself giggling at some parts, thinking out loud Hey, that’s me! whenever she’d find herself struggling to wake up at 6:30 a.m. or resisting the urge to gorge on rich desserts. It was definitely a good decision to make this my first read for 2011. ; )

I quoted Stephen Covey in my last post (“It only takes willpower to give ourselves permission to make the experience.”), and Gretchen Rubin says something equally thought-provoking:

Perhaps. The feeling of control is an essential element of happiness—a better predictor of happiness than, say, income. Having a feeling of autonomy, of being able to choose what happens in your life or how you spend your time, is crucial. Identifying and following my resolutions had made me feel for more in control of my time, my body, my actions, my surroundings, and even my thoughts. Getting control of my life was definitely an aspect of my happiness project, and a greater feeling of control gave me a major boost in happiness.

And speaking of which, I better start preparing to leave now. I’m meeting some of my high school buddies, and though it’s a lazy Sunday, it has been one of my resolutions to show up and spend more time with my friends. ; )

Have a happy year ahead! : D