Given my (fun)employment, I now have the liberty of doing whatever I wish and whatever I missed out on until further notice. It’s my 2nd day of “freedom”, and things have been going by pretty smoothly. I have sort of been re-mapping my life, choosing the things I want to exhaust my energy on. Which. I. Think. I. Have. A. Better. Idea. Of. Well, sorta.

Friday was my farewell lunch with officemates whom I miss already. Booo. We had a blast at C2 where we pigged out to really good Filipino food. Yummm. I also had dinner with Mico that evening. We tried out Toast Box in Greenbelt 5 (review to follow!). The Horlicks Dinosaur was really the highlight of my meal. Yum yum. Drinks which end in “dinosaur” are always super good.

We were also lucky to chance upon the performance of Australian multi-awarded vocal group, The Idea of North, which showcased a variety of acapella numbers. They played a lot of Sting, Aretha Franklin, a Chili Con Carne Song (my personal favorite), and a mash-up of John Williams songs (Star Wars + Superman + Indiana Jones + + +!!!). They were so amazing and talented in the performing arts…they genuinely deserved that standing ovation. : ) 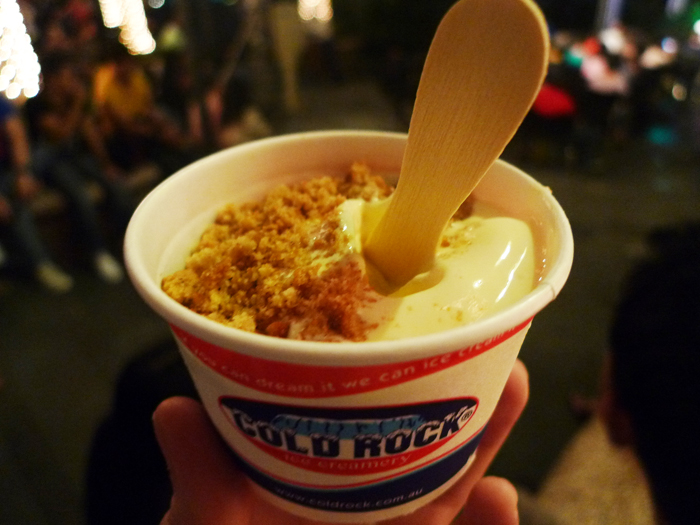 I also did a bit of mini-shopping. : D I got my Cousin Anika’s birthday gift: a Ken! I was able to get one of their last 2 Ken dolls in Toys ‘R Us. It’s crazy how these Barbie-Men sell like hotcakes, and not to mention, how they burn a hole in my wallet! Anika told me that she needed a Ken doll because her Barbies don’t have boyfriends. She already has 12 Barbies, and now, 1 Ken. 12:1. : | Ah, the naivety of kids.

I also got this bracelet at Topshop which says FREEDOM on the tag. I thought it was really apt to buy a “Freedom Bracelet” to commemorate last day of work. Yes, I like remembering important dates. I felt like this was a memorable one. ; ) 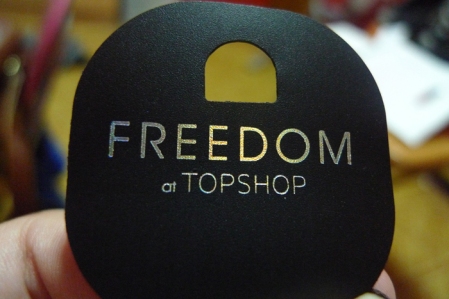 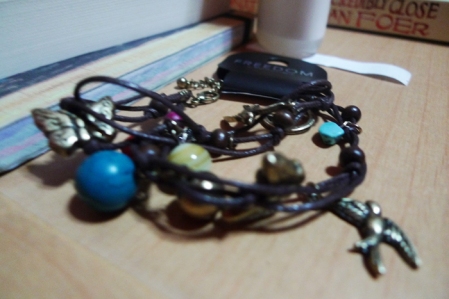 We also saw some of the cadavers from The Myth of the Human Body Exhibit in some boutique in Greenbelt 5! They look just like the ones up in the website. Creepy and cool, nevertheless. 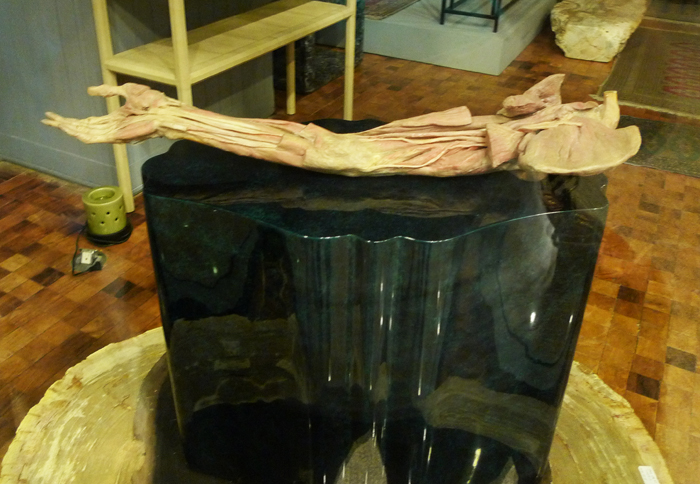 I took my Grandpa out to lunch at Banapple, Katipunan. Actually, this was on a whim because he got hungry on the way there. It felt weird that my funemployed-ness hasn’t sunk in yet because I had that Dread-of-Monday-Feeling lingering still. : |

After lunch, I met up with Mico at Xocolat. We had some hot Organic Xocolat because the cold windy weather needed a warm comfy drink to balance it out. : ) We also watched The King’s Speech, which I found to be bloody brilliant!, as the British would say. ; ) I was deeply moved by Lionel’s and Bertie’s relationship/friendship/having-each-other’s-backs-thing. It sent a tear rolling down my cheek. ;___;

Mico and I also went to The Boulevard Diner for dinner. OMG GREAT TASTING BURGERS! Then we went to Greenhills to shop. Me, clothes. Mico, toys. I also saw this cute set of Pirate Stickies. I was really tempted to purchase the stickies, but I honestly have no use for it, therefore, I let it go. I still think about it. ; )

We also saw President Noynoy Aquino at Promenade! He is such a cute President, by the way! : ) Got some Happy Lemon and headed off to Sandy’s place for some Batman UNO Madness with her and Ryan. It was a great day. : )

Today we went to mass early because my Grandpa had somewhere to go to in the afternoon. It was the Fiesta of Sto. Nino (Baby Jesus), I think. I tend to zone out sometimes during mass, and last Sunday was one of those days. I saw a lot of old people though and wondered what I would be like when I was 60…

We had lunch at Abe, Serendra and we sat down to a scrumptious meal of Lamb Adobo, Pastel something Lengua, and Binukadkad na Pla-Pla. I also learned from my Grandma that Tilapia or Pla-pla is also known as St. Peter’s Fish and that they thrive in Egypt. So technically, we are eating Egyptian fish! Wow, imported! Hahaha. But the fact that Discovery Channel says that this is probably the fish Saint Peter ate makes me feel a bit humbled. I usually take this fish for granted, but I guess now I can see it in a different and more religious light (?)

I spent the remaining hours of the day cooped up in my room, preparing my curriculum for this Creative Writing Workshop I am holding. I also dug up my Dr. Seuss and Roald Dahl educator’s files! I usually download these things for fun and curiosity and experimentation (on my cousins), and simply because I love both authors! : ) I never expected to actually use these modules, but now I will! :’) It will be the first time I will be formally called “Teacher Mikka”. (Inward squeeee!) Though temporary, I still feel secretly giddy about it. More on this elaboration in a different entry. ; )

And knowing that I have no work-related emails to wake up to, no meetings to look forward to, and no deadlines to stress about, kind of validated the existing detachment I have with my former company.

Waking up at 8:30 a.m. and worrying about nothing felt weird. When I was still employed, I usually woke up earlier…my mental to-do list flashing my deliverables for the day. YES, I felt this even when I was on leave. Needless to say, Clients also called me during my leaves. : | It wasn’t like I woke up without a purpose, it just felt…queer. And odd. And different.

So I went to the gym which is just across my office building, thinking “what if I bump into so-and-so?” Friends texted me, asking how it felt to be “emancipated and free.” LOLOLOL. I replied, telling them that I felt like I was just on a leave–sans the work-related calls. Which was true.

I met up with Isa in the afternoon for some coffee and Bon Chon Chicken! We talked about fears, and life, and growing up. Goals, passions, God’s providence, etc. I felt so refreshed after our little chit-chat, so I spent a bulk of my evening scribbling on my journal and prayer notebook. I guess that this was when it eventually sunk in: New Year is New and this is technically a new life I am living. No strings attached anymore. I spent more than half of 2010 doing something I wasn’t really passionate about. It was a bitter pill, yes. But at least it was a great learning experience.

So I went home, eased my mind with a bit of Gossip Girl. Watched Love & Other Drugs and hated it. It was an interesting day.

I guess I am writing about this realization ultimately because of my Great Perhaps. For the past nine months, I have been on autopilot. It had a great impact on my personal life, and from a distance, I could see that I really did not belong in that world. That is why, I can say with complete resolve that I have absolutely no regrets about my decision. For a split second though, I had the feeling like I was walking on thin ice, knowing that I was prone to financial instability for a while. But then, I know deep in my gut that this is the right thing. Honestly, this has been a really bold decision. I can’t still grasp the overwhelming reality of the future’s uncertainty, or my being nowhere, or whatever. I just know that this is OK. That I am fine. That this is right. I firmly believe that this is where I am meant to be at this point in time. I also know that this is where God wants me to be. So why should I be afraid?