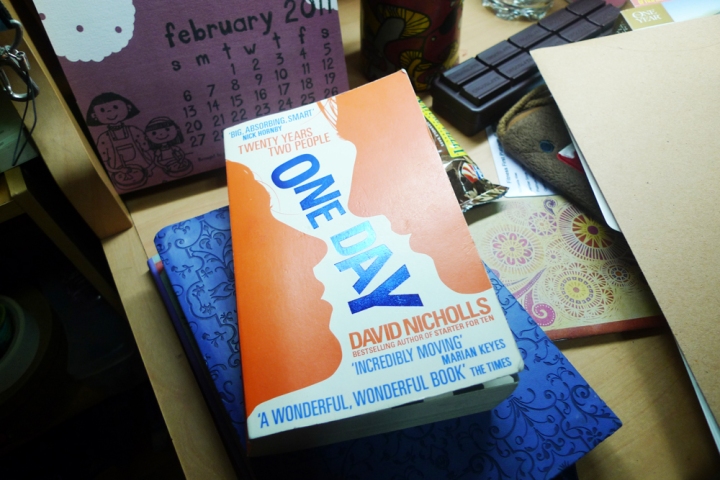 I am writing this review because I was somewhat compelled by the ubiquitous presence of Valentine’s Day. Also, I’ve been immersing myself in loads of chick-flicks lately: You Again, Going the Distance, Blue Valentine (not a chick flick though), etc, so maybe I have also been influenced by those as well.

It’s been quite a while since I read a genuinely good love story. I can be a major crybaby when it comes to books, and this one triggered my tear ducts while waiting for my drink at Happy Lemon! And given the absence of a restroom, I merely feigned a cold and sniffled here and there.

We have heard of the saying, “You can live your whole life not realizing that what you’re looking for is right in front of you” numerous times. Usually, it comes in the form of Guy confessing to Girl that he loves her, him getting down on bended knee, saying that should’ve opened his eyes more. Girl falls head over heels and smiles at Guy, insert cheesy dialogue + I love you toos, Guy and Girl make out. And voila! Happily ever after. Simple as pie.

Well the quoted line above is actually One Day’s backbone. You can see it scribbled on the back cover. I was a bit hesitant to buy this book when I saw it the first time because it looked like your typical, ordinary, corny love story. Until my friend, whose taste in books I trust, recommended this to me, saying that it was very touching. I decided to give it a shot. And guess what? She was right.

The whole book spans twenty years of the characters’ lives. Each chapter is the same date: July 15, but of a different year. As the story unfolds, this date actually paves the way to some of the most important events in their lives; guaranteed to take the reader on a breathtaking emotional roller coaster ride! I found it brilliant how Nicholls was able to use this handle to capture the story’s progression and character development without missing a single beat!

The story basically chronicles the relationship of Dexter Mayhew and Emma Morley. Dexter is the handsome playboy–testosterone-packed and egocentric, affluent and happy-go-lucky. Emma on the other hand, is the passionate girl every man wants to bring home to his mommy. Though a member of the middle class, she is an idealist in possession of a heart of gold.

It all begins on their last day as students. Dexter and Emma lie in bed after a “dinner date”, talking about the rest of their lives. They both promise to have a platonic relationship, forcing to dim any spark that may arise despite their endless flirting and banters with each other. They develop a best-friendship, and an unspoken understanding that they simply cannot end up with each other, regardless of the building affection that completely negates this ~ehem~ “understanding”.

So off they are with their own lives. Dexter hops from woman to woman, drowning in cocktails, and living life as lavishly as he could. He ends up being a television celebrity who enjoys its perks, its peak, and its promises.

Emma, on the other hand, only dreamed of a life like Dexter’s. She worked as a teacher and waitress. Despite Dexter’s frivolity, Emma becomes a comedian’s girlfriend and a Principal’s mistress. Though her dreams of being a writer fall short as of the moment, the pace gradually picks up in the middle.

Further into the book, it seems like the tables have turned as Dexter’s celebrity status has suffered its plummet and his finances, depleted. Emma is now under the limelight, as she becomes a very distinguished Young Adult writer.

Throughout the two decades shared by this couple, the reader bears witness to their whirlwind of a relationship. The ups and downs, the almosts and damn-its all build up to a story so indescribably heartwarming and emotionally compelling. Though I felt like an eavesdropper to their conversations and an intruder to their most personal moments, I completely agreed with Jonathan Coe said about the book: “You really do put the book down with the hallucinatory feeling that they’ve becomes as well known to you as your closest friends.”

One Day created just the perfect imbalance between two of the most ordinary characters, turning their relationship into a most unique one. It formed an atmosphere of possibility between the most impossible of relationships. It’s an incredible story about love, friendship, and life–definitely one of the best love stories I have ever read. Despite its humor and endearing quality, what I loved most about this book was the buildup and transition from best friends to life partners.

To quote Drew Barrymore in Going the Distance, “You know, the only way you’re content in life is if you marry your best friend…” I am a fan of couples that started off as BFFs and ended up happily married. I guess spending your life with the person who knows you best is one of the most reasonable things in this world! If they can stand your unbearable tantrums, moody days, constant ranting, and still be able to look you in the eye and say that they love you, then you know you’ve got something special right there; irreplaceable even…

With this, I leave you with one of my favorite excerpts from the book:

Finally, she love someone and felt fairly confident that she was loved in return. If someone asked Emma, as they sometimes did at parties, how she and her husband had met, she told them

“We grew up together.”

One thought on “Book Review: One Day by David Nicholls”